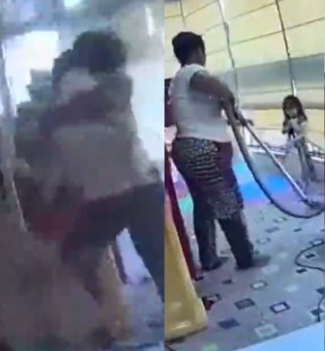 A nanny is currently being celebrated online after a video of her rescuing her boss's daughter during the explosion that rocked Beirut, surfaced online.
The video shows the nanny moving swiftly to carry the child away after the explosion shattered some parts of their home. The timely intervention of the nanny saved the child from getting injured or being killed.
CLICK TO WATCH VIDEO

Popular posts from this blog

August 13, 2020
Mature couples aren’t people who fall in love so recklessly. And that’s the truth. When you think of someone “falling in love,” you immediately picture a person in some kind of free fall with no control of the situation whatsoever. But that isn’t what mature people do. No. Mature people are always going to want to have some sense of control over the situation that they are in. And that’s why mature people never really “fall in love” in the traditional sense of the term. They step into it. They walk up to it and take ownership of it. And that’s what love is supposed to be. There really isn’t much truth to the saying that you can’t control who you love. It doesn’t always paint the whole story. Yes, you can fall in love with just about anyone. However, you can always control how much you allow yourself to love that person. You can always control the amount of love that you can give to another individual. You can always control who you choose to manifest the love that is within your hear
Post a Comment
Read more

August 12, 2020
52-year-old Sean Finnegan and his 22-year-old girlfriend Rebecca Dishman have been charged with the murder of Jennifer Gail Paxton after her body was found dismembered in a freezer on August 6.  The couple who are accused of kidnapping, torturing, sexually assaulting and murdering the woman they initially offered a place to stay, have both been charged with first-degree murder, aggravated kidnapping, abuse of a corpse and tampering with evidence. Finnegan also faces aggravated rape and abuse of a corpse charges while Dishman faces aggravated sexual battery and tampering with evidence charges.  Arrest warrants obtained by local station WATE revealed that the couple lured Paxton who was homeless, to their home in December 2019 by promising her a safe place to stay. They however held the 36-year-old against her will, chained her to a bed, shackled her with a dog collar and binded her arms with zip ties.  Finnegan and Dishman allegedly used baseball bats to beat Paxton so she wouldn'
Post a Comment
Read more

August 04, 2020
A woman has narrated how she rewarded her parents for investing in her education, despite advice from people telling them that a girl child education was a waste and will only benefit her in-laws. @NqobaKonkhe said her father was a security guard in a company before being promoted to a supervisor. His new position allowed him to put one of his children in the company's private school. The man chose his first child, a girl, to go to the private school.  However, people adviced him against it and told him to pick his son because the girl will most likely get married or pregnant before finishing school. Her parents ignored the advice and allowed her to continue to a private high school. While in high school, friends warned her parents again that the investment on their daughter will be used to better another family, not theirs. But her parents ignored them again. The opposite turned out to be the case. Her brothers started having children and couldn't help the family much so the d
Post a Comment
Read more